Good news and bad news.  The good news is that Da Nang has made it to third on the race tracker – their best position for a long time.  The bad news is that I am at home typing this, and not on the boat with them.

I am still struggling to come to terms with the fact that my goal of circumnavigating the world is not going to happen.  No matter how many people tell me that the achievement already attained is no mean feat, and I don’t disagree with them at all, it is not going to be the same.  I have a real chance of getting back on the boat in Derry.  My consultant has said he will sign my forms declaring me fit, it is then just up to the Clipper insurance to give me the go ahead.  My forms will be signed at the beginning of July well in time for the Derry departure of 17th July.  But how will I feel sailing into London on 30th July knowing that there is a huge chunk missing?  Better than not sailing into London, but not being able to celebrate fully with my fellow crew members who will have made the grade.

But that is enough of that.  I need to find the positives out of all of this, and being resentful is not going to help.  The other good news is that Paul has not thrown me out on my ear – I think it came very close a few times!  Readjusting to normal life is one thing for me, but Paul has had to readjust to me being back early as well.  That, it seems, is the harder of the two!   It has truly been the “Race of My Life”, and I could not have wished to meet a better group of people.  If nothing else, the new friends I have made will enrich the rest of my life.

As to progress on the shoulder – slow but sure.  It is hard for me to notice a difference on a daily basis, but those who only see me once a week or so can see a vast improvement each time.  Lots of hard and painful physio!  I am doing as I am told here, and more than I am told.  Good advice from Marc and Lara.  I think it is paying off.  I may not be able to raise the yankee single handed (that would have been a shock if I could) but I can certainly do more than I could when I got off the boat in Seattle.

My family and I all went to New York to meet the fleet during this stopover – they were booked to come and see me long before I had the accident, so I just booked an extra ticket.  It would have been very sad if I had still been on the boat, as the boat arrived before we did.  I am sure I would have been happy to have a couple of extra days in New York, but it would have been a disappointment for them not to be able to cheer us in.  So it was a happy crew that we met in New York.  They had had a good leg, and there was not much on the boat that needed fixing, so everyone had a good few days off.  That would have made such a difference.  Even Wendo had a couple of days off – unheard of!

We had hired a car, as we had a house in New Jersey rather than New York, so that helped with the victualling.  There were more people helping this time than in any other stopover – I think I went wrong somewhere along the way.  And the list was the shortest I had ever known – a little overspend and over stock on the last race meant not so much to buy for this one.  Val had taken on the main responsibility for this leg, ably helped by Kirsty and Stuart.  And with Paul & I shopping as well, it was a good job there wasn’t too much, as there wouldn’t have been room in the car for the normal load!  And of course, we had to have steak for lunch mid shop, and stop at an ice cream parlour once we had finished.  When in Rome…………

I also had a birthday out there, and decided to have a crew party at our house – which was perfect for the occasion.  We had a swimming pool, hot tub, pool table etc etc, and eight bedrooms which we managed to fill for the night.  It was a fabulous day.  The weather was hot and sunny and the company was perfect.  I genuinely hope that these people remain in our lives forever. 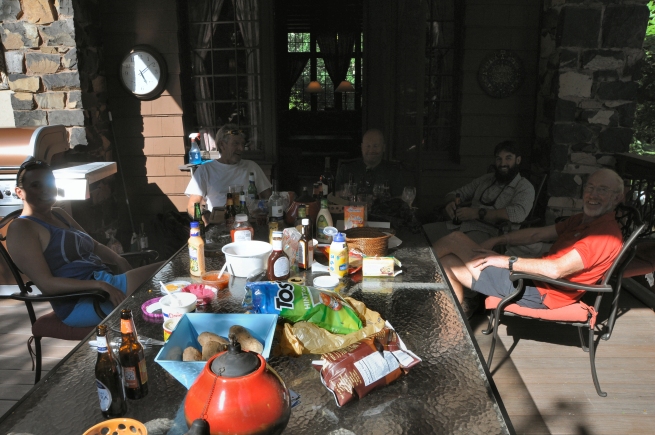 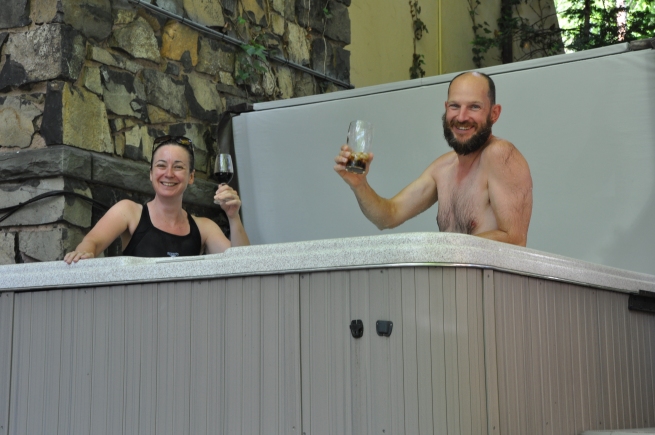 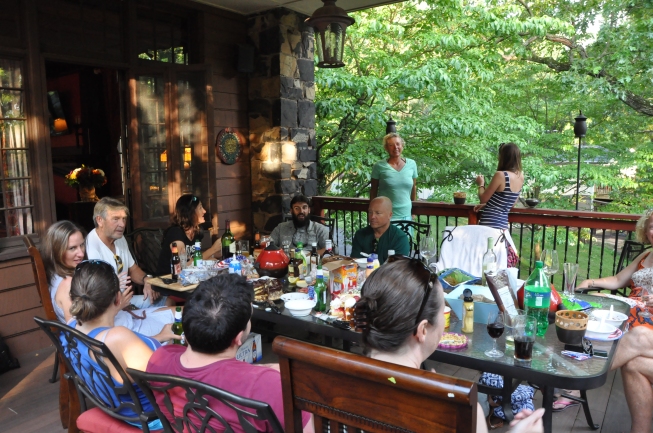 So, in preparation for rejoining the boat I thought I had better get some of the gear together,  only to find that I couldn’t locate my foul weather gear or my sailing boots.  I had been hunting high and low for about two weeks, as I had a feeling my boots may have still been wet when I came home from Seattle.  I even went to the lengths of replaying the cctv cameras footage of when I arrived home to see if they came out of the back of the taxi.  They did.  I am pleased to say they have eventually been found.  Harriet decided to put them in a cupboard halfway up the staircase to the third floor where we keep an old Christmas Tree.  Why didn’t I think of looking there?

Those found, I am now ready and waiting for my final go ahead.  I have booked a one way flight to Derry only, and just need a signature on the dotted line……………